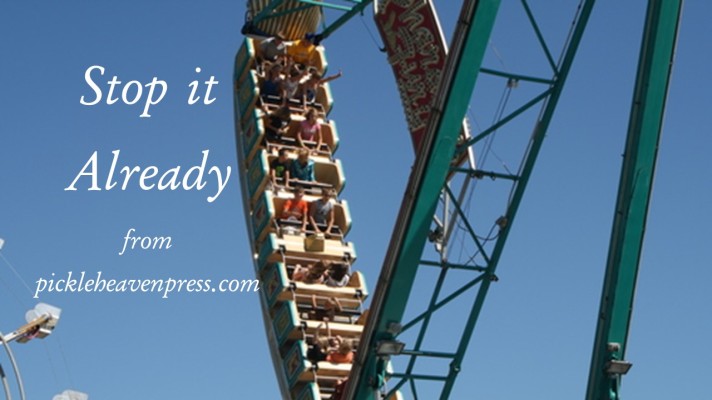 Life is wearing on me like that crazy day at the State Fair.  My daughter wanted to ride Pharaoh’s Fury.  This carnival favorite features a giant ship, that rocks on a pendulum creating a sense of weightlessness.

She asked me to go with her.  No way! I get dizzy in a rocking chair.  But she pleaded so my reluctant daddy heart walked the plank with her.

The boat got to rockin’ and my stomach got to heavin.’ Back and forth – forever it seemed.  As I groaned for relief, the ride finally began to slow.

But the operator saw no one else in line.  So he yelled out, “Do you all want to go again?”  I whimpered “no,” but the cheers prevailed.  So, I suffered a second plague with the Pharaoh.

Once it stopped, I wobbled over to a bench and took the next 30 minutes to find my stomach.

Well, its déjà vu all over again.

The world has suffered through a horrendous year of the virus, until the morbid ride finally began to slow.  But it has revved up again and we are all thoroughly sick of it.

We are used to having smart people who quickly and decisively solve our problems.  But this ride just won’t end.

As to the who or the how it got started, I won’t venture to say.  BUT I am certain I know who can stop it.

In the past, the Lord has stepped in and halted plague and pestilence.  2 Samuel 24:25 says, “And the Lord accepted prayers for the land, and the plague was removed from Israel.”

Prayer was the key then, but our prayers seem to go unanswered today.  Why is that?

The apostle Paul was beset by what he called a “thorn in the flesh.”   This thorn was a metaphor for a seriously painful situation in Paul’s life – something that he could barely endure.

We don’t know for sure what it was. Some conjecture that it was a problem with his eyesight.  Others suggest that it referred to a tenacious persecutor.

God said no to His faithful servant – the amazing apostle Paul, but He did tell him why.  He said, “My grace is enough for you, for my power is made perfect in weakness.”  (v. 10)

Paul was an accomplished person.  He even boasted about the things he achieved prior to his conversion.  (Philippians 3:2-6).   No doubt, he was sometimes tempted to bring his do-it-yourself mentality to the work of the ministry.

So, God allowed the thorn to remain, to remind Paul that his intelligence, and strength and ingenuity may be great, but it was insufficient.   It was only in a state of weakness and affliction that Paul could sense his need and fully experience God’s strength.

Me too!  I intellectually know that I need the Lord, but it often takes difficulty to remind me of it.  And though it’s crazy, many who live on this planet don’t believe they need God at all.

God has the might to remove our plague, but He doesn’t seem to have the motivation.

When I was a kid, I wanted to get rich, so I signed-on with a mail-order company to sell personalized Christmas cards.  But I had to sell in the summer months to allow time to process the orders.

Do you know how many people buy Christmas cards in July?   No – even less than that.  I didn’t even make enough money to pay what I owed for the sample book.   My dad quickly sized up the situation and knew that I needed to be bailed out – but he waited.

For weeks – he waited – until I finally realized my mistake and that I needed my dad and the help he could bring.

I wonder if that’s what God may be waiting on?

A PRAYER: God, this ride is just too much for us.  Please tell us what we need to know.

This has been Jim Johnson and pickleheavenpress.com

May the grace of our Lord Jesus be with you.

Scripture references are from the NET Bible®

It’s the holiday season and the Christmas cards are already coming.  Many are glossy flat cards with pictures of happy families on the beach in Cozumel.   Just what I need as I suffer the murky, bone chilling winter weather.   Oh well, its great to see the faces of family and friends, though they be tanned.

Maybe God ought to send a glossy of Himself.  He has always had an image problem!   He can’t be seen and has seldom been heard which has, therefore, generated a lot of conjecture about what He might be like.

An ad agency in ancient Philistia came up with the Dagon campaign which presented God as a statue – half fish / half man.   (think like mermaid except merman.) The Philistines were big into fishing and probably thought they needed a fish god to get their limit, but their lame attempt did God a disservice.

Other cultures have miscommunicated His character. There was the god who teased men with lightning bolts, and another who chased the skirts of earth-bound babes.  And then there was the bizarre many-breasted god of fertility.  (no comment)

The Jews of Jesus day contributed to the chaos by putting forth a God of stifling legalism.

There have been a tiny few who got a passing glance at God – and they regretted it.  He appeared at the burning bush and, “Then Moses hid his face, because he was afraid to look at God.”  (Exodus 3:6) I had a blind date back in high school who reacted the same way when she first saw me.

God was too great, too mighty, too holy, too scary – just too much God for an ordinary human being to take in.

Somehow God needed to bridge the gap and show up in a way that we could perceive and appreciate.

One Christmas season He did exactly that.  He sent us a Christmas card with His picture on the front.  But, instead of sunny Cozumel, the background was a dimly lit, drafty, stable surrounded by livestock.

On that day, God took upon Himself human flesh in the person of Jesus.  There are multiple reasons why, the first of which was to help us understand what God is like.

The apostle John wrote, “No one has ever seen God. The only one, himself God, who is in closest fellowship with the Father, has made God known.” (John 1:18) This is to say, that when a person looked upon Jesus, He saw God.

To listen to Jesus was to hear the voice of God and to sense His heart was to feel the pulse of God. To understand God, one only needed to understand Jesus.

I met someone for the first time who said to me, “Oh you must be Jordan’s father.”   I said, “I am.  How did you know?”   She said, “I hear him in your voice, and see him in your face and your mannerisms.”  Wow!  I felt like I needed to call and apologize to my son.  My point, however, is that a son can communicate his father.

Jesus communicated both the power and the compassion of God when He fed the 5,000.   He sobered us with the wrath of God when He overturned the tables in the temple, and He made God approachable when He gathered the little children to Himself.

Knowing God through Jesus makes a difference.  When He attended the wedding at Cana and catered it with wine, He gave us the freedom to enjoy our lives.  He gave us a taste of His mercy when He said to the woman caught in adultery, “Go and sin no more.”

You are sure to get a Christmas card this season with a manger scene on the cover.  Just for fun, take a marker and write on top of it, “From God with Love” and hang it with the rest of your cards – and be ready to explain it to your visitors.

All biblical references are from the NET Bible ®

Bonus: Check out the guitar Carol below