How do marching bands stay in step with each other?   Most are synchronized to the music.  They pivot and turn based on specific notes in the song.

There are some bands, however, that are directed solely by the whistle of the drum major.   They scoot when they hear the toot.  Texas A&M University has such a band.

They met on the gridiron to play Rice University that day.  Rice is a school long on scholars and short on skills.  They were accustomed to losing and compensated by messing with their opponents.

The Rice band stood on the sideline at halftime to watch the Aggie band do their drill.  They soon pulled out their own whistles and with devious glee they randomly blew them hoping to confuse the Aggie marchers.

It worked!   The band was twisting and turning and going every which way.  Tubas and trumpets clashed, and flutes were flattened.

An airplane took pictures from above.  The band looked like someone had stepped on their anthill.

How funny!  But did you know that a similar scenario is at work in the church today?

2 Peter 1:20-21 says, “No prophecy of scripture ever comes about by the prophet’s own imagination, for no prophecy was ever borne of human impulse; rather, men carried along by the Holy Spirit spoke from God.”

Peter tells us that Scripture originated with God.  It isn’t the result of some imaginative con man, or an impulsive attention getter.   It came from God and was entrusted to men who recorded it under the sovereign direction of the Holy Spirit.

Scripture is the drum major’s whistle – the one that the Christian must heed.  It is true and trustworthy.  It is the means by which we experience freedom.  The truth sets us free from spiritual bondage for sure.  But it also creates freedom in our finances and our interpersonal relationships and brings blessing to most every area of life to which it is applied.

But there are rascals out there who stand on the sidelines with competing whistles..  Peter described them saying,  “…false teachers will infiltrate your midst with destructive heresies, even to the point of denying the Master who bought them. As a result, they will bring swift destruction on themselves.  And many will follow their debauched lifestyles. Because of these false teachers, the way of truth will be slandered.  And in their greed, they will exploit you with deceptive words.”    (2 Peter 2:2-3)

Peter wrote his letter in 67 A.D. but it seems like he had today in mind.  He predicted that the future would bring false teachers who will be motivated to confuse and deceive us.  They will infiltrate our circles and we will become comfortable with them.  They will be known by their weaknesses for sex and money.

But the most significant telltale trait has to do with Jesus.  They will “deny the Master that bought them” says Peter.  They will minimize the significance of Jesus and the value of His work on the cross.

Probe Ministries conducted a survey of 3,000 people in 2020.  They discovered that more than 60% of those between 18 and 39, who identify as born-again Christians believe that Jesus, Buddha, and Muhammad are all equal as Saviors.  (https://probe.org/probe-religious-views-study-2020-do-christians-believe-in-christ-as-the-only-savior-of-the-world/)

They see Jesus as no different than any other religious figure.  And yet Jesus Himself said, “I am the way, and the truth, and the life. No one comes to the Father except through me.”  – John 14:6

How could this misunderstanding happen?  Because only 5% of that same born-again group has a biblical worldview according to the survey.

The Scripture holds little authority for them.  They are not tuned in to the whistle of the drum major and are therefore easily misled by the random whistles of others.

Peter used the word “destructive” twice, emphasizing what will become of the church, or the family or the person that moves to those kinds of whistles.

What about you?  Are you in formation or wandering about on the ant hill?

A PRAYER: Lord help me to know Your Word well enough to instantly apply it to every life situation.

This has been Jim Johnson and pickleheavenpress.com.

May the Lord Jesus Christ be with you.

Scripture references are from the NETBible ®

In our family, “marching” was a season.  Each of our kids were part of the school marching band that entertained us at the football games.   From the oldest to the youngest, we spent about ten consecutive years in the stands watching them gyrate back and forth and weave in and out with precision.  It was fun but sometimes tedious.   A few of the routines were rehashed all 10 seasons.

Theirs was a military style band which required them to wear enormous hats with a brim that came down over their eyes.  Add a trumpet or sax to their lip and you could never be sure who it was.   In fact, we have a lengthy VHS video of a kid marching that we thought was ours but wasn’t.

Our son K.C. continued to march out of the high school band and into the U.S. Air Force.

My wife and I were present when he graduated from basic training.  When his unit entered the parade grounds, we were proud to see him marching in the very first row of the unit.   We thought two things, “Wow, we can see his face!” and “I wonder what he did to merit that?”

We later learned the answer was simply – he grew tall. He is 6’ 5”.  He and every other towering airman were deliberately placed at the head of the marching unit.

He told us that this was a tradition that dated back to the Romans.  They did it for psychological intimidation.  By placing the biggest, meanest, broadest men at the head the column, it gave the impression to the enemy that the entire army were all bruisers.   This also helped to obstruct the view of the soldiers behind them so that the enemy had no idea of their number.

The apostle Paul tells us that God ordered His ranks in a similar way.  In Colossians 1:15-16 he wrote of Jesus, “He is the image of the invisible God, the firstborn over all creation. for all things in heaven and on earth were created in him—all things, whether visible or invisible, whether thrones or dominions, whether principalities or powers—all things were created through him and for him.”

Christ was called the “firstborn!”   Firstborn refers not to a birth order but to the preeminent rank that belongs to one who was first born.

Paul tells us Christ is the firstborn, in that He was prior to, distinct from and highly exalted above every other creature.  He stands at the head of God’s marching column.

Paul continued in verse 18. “He is the head of the body, the church, as well as the beginning, the firstborn from the dead, so that he himself may become first in all things.”

Jesus bears the title firstborn again – firstborn from the dead.  This reminds us that He was the first and most important in rank to ever be raised and have His body transformed with immortality.

Because of His saving work on the cross, many more of us will one day be raised from the dead, but none more important than Jesus who faced the devil at the cross and prevailed at the empty tomb.

Take comfort my brethren.  Jesus marches at the head of our ranks.  He towers over all others.  He even hides us from the view of the enemy.   He shields us with the power of His might and leads us onto certain victory.  Praise His name!

A PRAYER: Lord, thank you for leading us and shielding us from our foes.

Scripture references are from the NETBible® 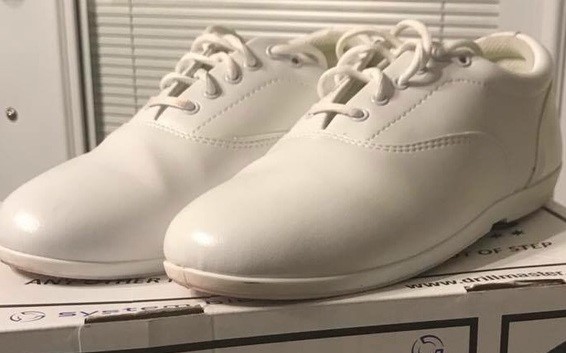 My son was in the marching band.  His uniform included a pair of white shoes – stark white shoes.  You could wear them in the dark to find your way.

I had to provide these shoes.  They were expensive and only good for marching.   We tried to get him to forgo the prom rentals and wear his whities instead, but he refused.

Every two years we had to upsize to accommodate his growing feet.  We forced his discards on his younger brother.

This worked well until his junior year.  He was wearing size 16 by then.   They don’t carry size 16 white shoes at Wal-Mart.  But we did locate a pair at abominable-snowman.com.

His little brother tried them on, and we decided to ship him to Florida to audition for the Ringling Brothers Circus: Atten: Clown Department.

My son most definitely left behind some big shoes to fill.

But so did my dad!

Dad was my childhood hero without a doubt.  Such a hard worker.  He was once actually criticized by the union steward who said, “Slow down, you’re making the rest of us look bad.”

He had opportunities to move into management, but he turned them down because it would have meant upending his family.

He put his kids through private school and financed it by doing things like cutting his own hair.

He could warm your bottom with a needed swat, and then warm your heart with a hug.

He seldom interfered once I was on my own, but was ready to offer sound advice when I sought it.

He wasn’t a perfect man, but certainly a good one.

Dad has gone on to glory.  His enormous shoes are empty and need to be filled.  Could I be that kind of man for my wife and kids, my grandkids and my employer?

Possibly!  Moses, the legendary leader of Israel, had died, after he had led Israel out of Egypt, through the Red Sea, around the wilderness and to the east bank of the Jordan River.

A younger man named Joshua was tasked with leading the nation across the river and into the land to finish what Moses had started – to claim the promises that God made to Abraham centuries before.

There was lots to fear – hostile forces, a sketchy supply chain and the prospect of failure.  God didn’t diminish the challenges, but He magnified the solution instead.  He promised to go with him wherever he went and in all that he did.

God told him to be brave.  I am not sure that you can just will yourself to feel brave, when you are feeling afraid.  You can however, move forward, despite your fears, trusting God to help you succeed.  That’s the kind of bravery the Lord had in mind for Joshua.

As a kid, I watched some teens play pinball at the bowling alley.  I accidentally bumped the table.  The game began to flash the word “tilt” and it shut down.  There were 3 angry teenage boys ready to tilt me.  I was terrified.

Just then, my dad appeared.  I ran to him and left my fears back at the pinball machine.  The presence of a father can do that for a kid.

Joshua assumed the lead.  When his crew stepped in the waters of the Jordan, the river ceased to flow, and Israel walked through it, just as they had once walked through the Red Sea with Moses.

What shoes do you need to fill?

Are you subbing for a beloved teacher or maybe replacing the supervisor at work who just retired?  Perhaps the memory of your mother is making you feel inadequate as a mom or maybe you are a widower and your wife has left a huge hole in your family life.  If so – remember, “Be strong and brave! Don’t be afraid and don’t panic, for I, the Lord your God, am with you in all you do.”