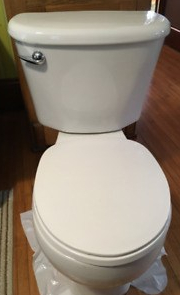 There are some prayers that I wish the Lord would not answer!  I was removing the toilet in the master bath because the drain was clogged with roots.  At the same time my wife was in the living room thinking, “Lord I would really like to have one of those newer taller models.  It might help me with the pain in my hips.”

Meanwhile, I lugged the toilet out to the garage and just as I arrived, the Lord answered her prayer.  The bowl slipped from my hands and shattered on the concrete.  Oh well, if I had been a better husband I would have bought her a new toilet anyway.

I am glad that God says yes to my prayers.  My prayer journal is filled, cover to cover with the evidence of God’s positive response to my pleas.  But sometimes he says no.

The apostle Paul had some kind of difficulty.  He called it his “thorn in the flesh.”   He wrote, “I asked the Lord three times about this, that it would depart from me.  But he said to me, “My grace is enough for you, for my power is made perfect in weakness.” So then, I will boast most gladly about my weaknesses, so that the power of Christ may reside in me.” (2 Cor. 12:8-10; the NET Bible)

Paul asked God over three different seasons of time to remove that thorn.  God said no!   “You need the thorn to remind you that you need Me and my power as you live your life.”

How infinite is this wisdom that sees what is and what could be.  And how gracious of God to say no when to say yes would limit or hurt us.

My wife thought she might be in labor with our first born.  It was 4 a.m. and there was a foot of freshly fallen snow on the ground.  I didn’t want to make that drive to the hospital unless I knew for sure it was time, so I prayed, “Lord, if it’s time, would you cause her water to break?”  The intervals between her mild contractions were growing shorter – but still no water.

The doctor said he thought it was a false alarm, but that we should go to the hospital anyway.   We literally snowplowed our way there with snow higher than our VW running boards.

They examined my wife and found that she was dilated 90% of the way.  But they also discovered that the baby was breech and the cord was between her and the exit.  (you know what I mean!)   The doctor broke out into a cold sweat and did a C-section in record time.

Had God answered my prayer back at the house, my beautiful baby girl would have suffocated in the womb.

Thank You, Lord for saying yes so often to us, but thank You as well for saying no to our short-sighted self-centered prayers.

PS: Here is a song by my beautiful baby girl. Enjoy!