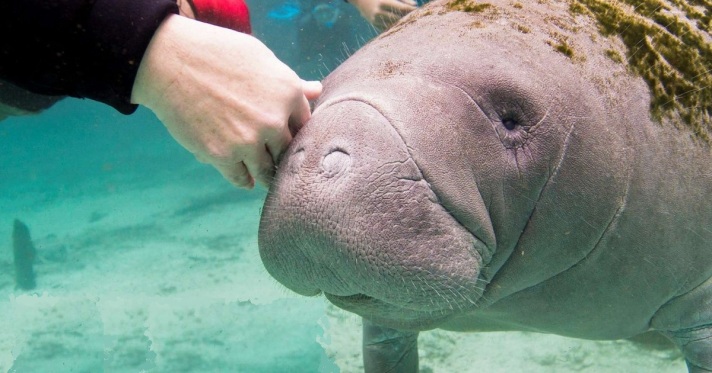 The family was basking in the sultry waters off St. Petersburg Beach.  Our insatiably curious nine-year-old grandson was towing his Styrofoam boogie board through the surf.  His grandma was nearby to keep an eye on him.

There was some commotion beyond him.  An aggregation of playful manatees had been spotted by some swimmers.  (An aggregation is manatee-speak for group – kind of like a congregation but better swimmers).  He began to furiously plow his way through the pounding waves, but then realized his grandma would love to see them too.  So, he yelled for her, “Mamo, there are some manatees.  Let’s go.”  He was all about manatees.

A manatee really is something to see.  He is typically close to thirteen feet long and weighs about thirteen hundred lbs.  He has two flippers, a big paddle for a tail, folds of flesh, deep set eyes and a puffy forlorn looking face.

An elephant, his closest relative, beats a manatee in the looks department hands down.   I sometimes wonder if the manatee was the last animal that God created.  Maybe He began with a big mass of grey flesh, shaped up its bulging form but then said, “I’m tired – that’s good enough.”

One thing for sure, the boy was determined to see those creatures and to share the experience with his grandma.  She saw the people gathered near the manatees, but she also saw the relentless white capped waves that were coming her way.  She figured that they would be aggregating in Texas by the time she got out there.

She tried anyway.  She pushed through the waves, wiping the salt from her eyes, while grandson bobbed around her like a cork on the water. But, it just wasn’t happening.   She stopped and began to turn in defeat when he pleaded, “Please Mamo, come on.  Please.  You can get on my boogie board and I will pull you.”

Oh my! What a picture that conjures up?   An impossible task for him, to be sure.

I wonder if that’s what Paul meant when he said, “love believes all things?”  (1 Cor. 13:7)  NET Bible® Out of his love for his mammo and the urge to share the moment with her, he believed he could and would tow her to the destination.

An amazing love – the kind of love that may be the missing ingredient of life!

Her husband was a hard man and she decided that she could not endure him any longer.  The marriage hung on for another 18 months, but it was really over the moment she failed to believe that things could change.

He was a jerk!  He sure was, but what might happen if she were to possess a love that believed all things?

What if she believed 1 Peter 3:1-2 which says that a wife can win a jerk of a husband over without nagging or coercion, but by the Christlike way in which she relates to him?

What if she believed that the presence of Christ within her, could empower her to love him even though it felt impossible?

What if she were to accept by faith that God’s design for marriage is “till death do we part” and that God, the one who brought them together, would do His part to help them repair what was broken?

What if she believed that her husband could become the husband and father he needed to be, once Christ took hold of his life?

What if she were to believe the crazy idea that God could actually rekindle a fire in her heart for her husband?

If only her love were to believe all things!

My grandson didn’t have the muscle, but he sure had the heart.  His grandma had a heart too and it melted before such devotion.  So, she turned and moved again toward the creatures but not before they began to move toward her.  And they met.  And they played together.  And then they moved on.  Texas was waiting.

His love prevailed.  Yours can too!