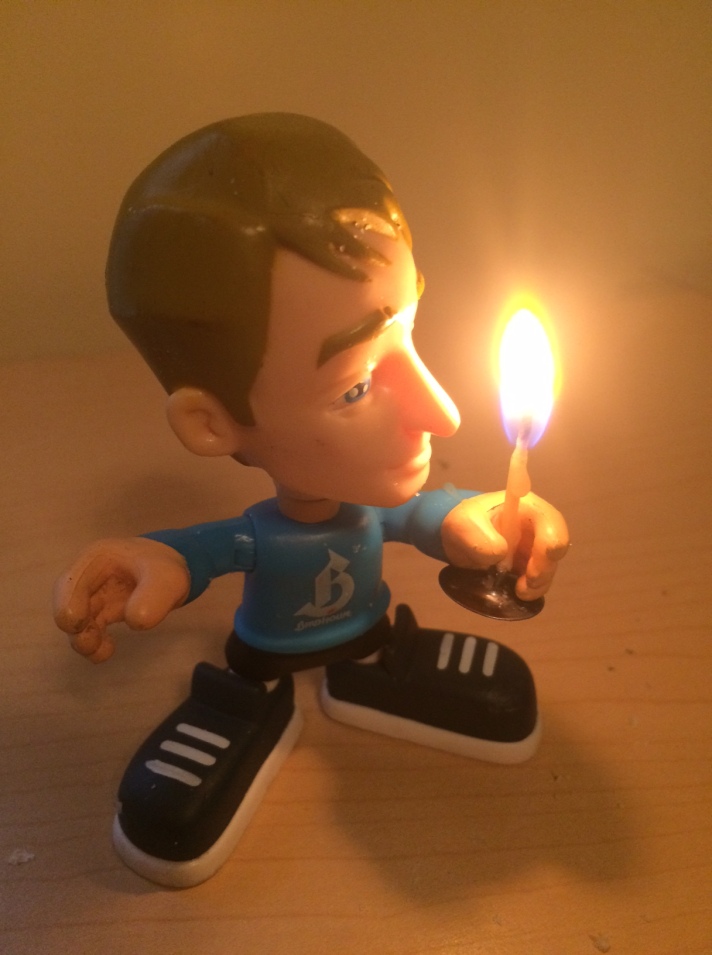 My cousins and my siblings and I were playing hide and seek in the small basement of our home.   Hiding places for the slew of us were as scarce as hen’s teeth, but my little brother Doug improvised.

He searched the back room and found that the furnace had a hood which extended downward to within 3 feet of the floor.  He was able to stand under it with his head in it.  A perfect fit.  Never mind that only his head and shoulders were hidden.

Believe it or not, he was the first to be caught.  Game over.  In fact, we were done for the day.  Up the stairs and through the door and into the kitchen we went, where my aunt sat and nursed a cup of coffee.

She sniffed the air and asked in a disgusted tone, “What is that horrible stench?”

Well – it was my brother and the unmistakable scent of burning hair.  His crew cut had been scorched by the heat in the furnace hood.  His hair was reduced to ashy, crispy nubs.  Actually, he would look quite stylish today.

As I recall we all got a spanking for that.  Thanks Doug!

My brother did not incinerate – but he could have, because the person that gets too close to the flame often does.

That’s what happened to King David.  He was taking a stroll around his palatial penthouse, when he happened to look down upon another rooftop where a beauty was bathing.  Instead of moving away from the flame, he lingered and watched (and his hair began to smoke.)  Like my brother, he thought that he was hidden and could beat the game.

David used his kingly authority to make a royal mistake –adultery, which led to conspiracy, and then murder.  His example poisoned his children and his Kingdom was crippled.  It all began when he made the choice to stand too close to the flame. (2 Samuel 11)

Joseph on the other hand, was aggressively pursued by the wife of his boss.  He consistently resisted her and when she finally forced the issue, he left his toga in her hands and ran for cover. (Genesis 39)

Paul put it succinctly in 1 Cor 6:18, “Flee immorality.”  We just can’t stand in the flame or be anywhere near it.  We gotta run from it, fast, as soon as we sense the heat.  We need to put distance between ourselves and temptation.

We were taught to pray about temptation in the Lord’s Prayer. Can we really ask Him to deliver us from evil if we are content to dabble in it?

So, what do we do about the flame?  How do we distance ourselves?

We could get a filtering app for the phone to block the questionable stuff on the net.  And it would probably be wise to quit lingering at the Keurig with that hottie at work.  And if there really is power in suggestion, then maybe we should be a little more discerning about what streams onto our flat screens.

Years ago, I discovered an effective way to douse the flame.   Temptation likes to hide.  It lurks in the recesses of the mind and is potent as long as it stays in the dark. In fact, it grows there like a black mold.

To disarm it, temptation needs to be dragged from out of the dark and into the light.  So, when I am tempted, I interrupt it, by verbally saying, out loud, “No!”  Using my lips to say it, and my ears to hear it, exposes the threat.  It gives temptation a cold shower.

As a pastor/counselor I have passed this secret on to many, (mostly men) who have also found it to be really helpful.

Well my brother was a hard core hide and seek player!  He stood there in the heat while his head was being charred.   Believe it or not, he is still with us and enjoying his 6th decade and he has a good-looking head of hair with more color than I do.  But he also has somewhat of a nervous tic.  He jumps every time the furnace kicks on.