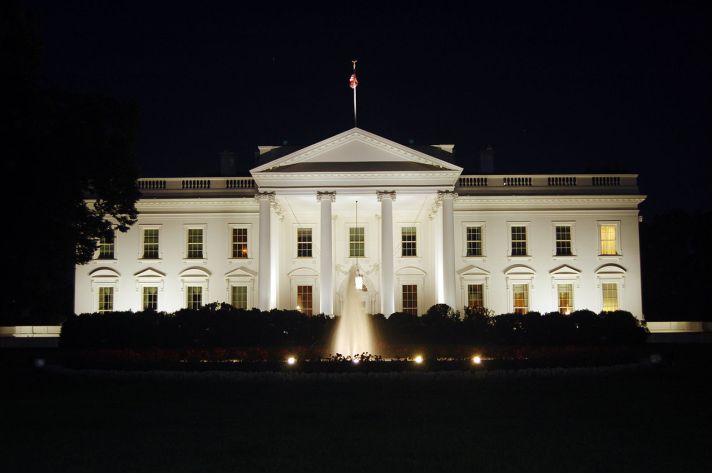 I had my eyes set on the White House.  Just for a visit.  The country could never endure me as President.

So, my family made plans.  The travel guide advised me to contact my Senators and Representative in advance to request passes for V.I.P.s, (which evidently meant Very Inconsequential Persons, because anyone could get them.)

One Senator sent us passes to the FBI building and the Mint.  (where I got in trouble for picking up samples)  Another got us a backstage tour of the Capitol building which was sort of like watching politicians on HDTV.  Their blemishes were extra apparent.

But the office of our Representative didn’t respond.  (He lost my vote.) And no one provided passes to the White House.  I was sad.

But while we were in D.C., I received a call from the office of our Congressman.  (Oh man, someone told him I was changing my vote.)

The lady said, “If you would still like to tour the Whitehouse, then go to the east gate tomorrow at 10 a.m. and look for a Blue Lincoln.”  “As in Abraham Lincoln?” I asked.  (she didn’t laugh. Oh well – neither did you).

And that’s all she said.  So mysterious and creepy.  Was an FBI agent going to smuggle us in?

The next day we arrived, the Lincoln pulled up, and out popped a C-Span celebrity – our Congressman Ralph Hall – in person.  He knew my name and that I was a pastor.   He was literally there for me.  I was speechless.

We followed him, past a long line of tourists and through a heavily guarded, special access gate, and into the headquarters of the most powerful and influential nation on earth.

It was so cool to have that kind of access!

But listen, mine was a paltry experience compared to the kind of access that Jesus gives us.

He spoke of, “the Father’s house” which is considerably bigger than the Whitehouse and represents an infinitely greater power.  It is an eternal dwelling.  The British can’t burn it to ground as they did the Whitehouse in 1814.

According to Jesus, it’s the place to be. He said, “There are many dwelling places in my Father’s house. Otherwise, I would have told you, because I am going away to make ready a place for you.”  – John 14:2

He offers us special access to the Father’s House – to see it and roam the vastness of it and even to dwell in it – forever.

Paul wrote in Romans 5:1-2.  “Therefore, since we have been declared righteous by faith, we have peace with God through our Lord Jesus Christ, through whom we have also obtained access…“

Because of our faith in Jesus and His finished work for us on the cross, we obtain access not only to the house, but to the occupant of that house.  We have peace with God through our Lord Jesus Christ.

And we don’t have to kidnap his cat to have it.

My congressman knew who I was, but Jesus knows us even better and He calls us by name (John 10:3).  He invites us to follow Him as He leads us home.

A friend was telling me that his dad had lived the life of an alcoholic.  He hurt a lot of people and he was a committed Christ critic.  But then he was diagnosed with a slow-moving, but terminal form of pancreatic cancer.

His son regarded the cancer as a blessing from God, because it caused his dad to consider his mortality and eternity.  At age 75 He confessed His sin and fell upon the grace and mercy of God.  Not long after, the Lincoln pulled up, and he entered the pearly gates.

Trust Him today, if you haven’t already and pickup your pass to the Father’s House.

PS: Congressman Hall made his trip to the Father’s House in March of 2019.  Such a great guy!   Can I still use him as a write-in candidate the next time I vote?

All references from the NET Bible ®

Picture by Rob Young from United Kingdom – The White House, CC BY 2.0, https://commons.wikimedia.org/w/index.php?curid=21831742