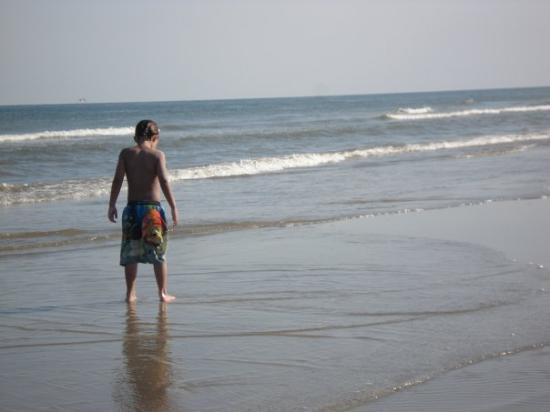 The boy jumped for joy in the Galveston surf.  He had just found a GoPro video camera in the sea.  It probably didn’t work, but he was excited, nonetheless.   His dad was a whiz.  He took the camera home, attached it to his PC and found that it was operational.  In fact, it had been intermittently recording.

It evidently had been turned on, then dropped and lost in the gulf.  It eventually timed out and turned itself off.  But as it tumbled in the surf, it would occasionally get bumped and then activated again until once again it timed out.   And the process happened over and over resulting in a topsy turvy snapshot documentary of the surf action of the gulf coast.

The first pictures were brilliant and clear, obviously capturing the waters that poured into the gulf from crystalline Florida rivers.   But the water in the gulf moves in a westward direction along our shores.  Other rivers then add their waters.

BUT those waters are full of silt.   The Mississippi River alone carries roughly 500 million tons of sediment into the Gulf of Mexico each year.

Which is why the water on that 600-mile westward journey went from gorgeous to gross – sparkly to murky.  Swimmers in Galveston sometimes emerge from the sea with a beard of dirt.  Which is why the camera filled up with dark and dirty images.

If the original owner of the GoPro could reclaim it and view the video, he would be shocked.  “What happened?”

Have you ever stopped and looked at your life and wondered the same thing?  “What happened?”

Like the Gulf of Mexico, there are currents in our lives that may carry us from the sparkly to the murky.

“We exchanged vows ‘till death do we part’ but 21 years later the marriage is on life support.”

“I used to be outgoing, but I have been angry for so long now, I have forgotten how to have fun.”

“I was really devoted to the Lord when I came to faith, but these days I am mostly going through the motions.”

These kinds of life changes are often subtle and go undetected, until one day we scan the full video and discover the disappointing truth – sparkly to murky.

What may be needed is a time each day to review that day’s footage – to evaluate while things are fresh, and changes can be made before toxic habits are cemented.

That’s what King David did.  Each night he lay on his bed and he meditated (Psalm 63:6).  He mentally reviewed his day.

He gives us a taste of his experience in Psalm 139:23-24.   He prayed, “Search me, O God, and know my heart; test me and know my anxious thoughts.  See if there is any offensive way in me and lead me in the way everlasting.” – NIV

He opened his life to God and asked that He search it – that God might know him for who he really was.   He left his fine robes in the royal closet and asked God to look beyond the role that he played to see the man he was.

Then he invited God to test him – to review the video of that day and point out where David may have caused offense to his wife, or his children, his friends, those he worked with each day and certainly God Himself.  David wanted to know who and how he might have offended.   He did not run from this information.  He humbly received it.

It has been my experience that when I ask for information like this, I get it. (especially from my wife) but yes even from the Lord.  He has no reason to conceal it from us.   As God caused each revelation to seep into David’s mind, the King confessed them. (Psalm 32:5)

Then most of all, He wanted help in learning from his mistakes that he might do better.  He prayed, “lead me in the everlasting way.”  He was aware of his imperfections and his need for guidance, so he invited the Lord to take the lead.

In this way David got a reset for his mind and heart and his behavior for the next day.   The sparkle was maintained, and the murkiness resisted.

A PRAYER: Lord I want to please You.  Help me by exposing my subtle sinful ways each day and leading me in the everlasting way.