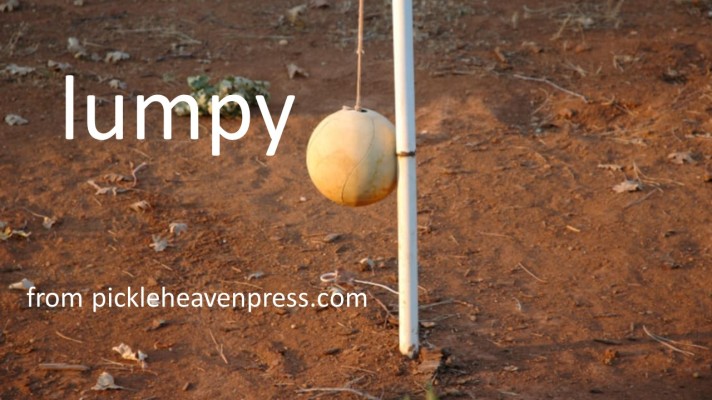 What game is well over 100 years old now, involves 2 players, a rope, a ball, a pole and a lumpy head?

Back in 1909, a woman by the name of Jessie Bancroft, gave us the game in her book Games for the Playground.  You may remember Miss Bancroft.  She was the President of the American Posture League.  (They rejected my membership application)

Anyway, in tetherball, a ball is tied, by a rope, to the top of a pole.  Two players face each other.  One slams the ball with their fist, with the goal of wrapping the rope around the pole until the ball touches it.

I remember learning the sport.  I would wind up and pound the ball as hard as I could, but before I could reposition myself, the ball would circle around the pole and hit me in the back of the head.  That’s the crazy thing about tetherball – the ball always returns to you.

I seldom won, but tetherball taught me a life lesson that has given me a measure of wisdom which is this: “What goes around comes around!”

Solomon said as much in Proverbs 11:25. He wrote, “A generous person will be enriched, and the one who provides water for others will himself be satisfied.” Solomon gave us a wisdom principle.  Be kind and generous to others and they will tend to treat you the same way.  I like the way that the New American renders it, “He who waters, will himself be watered.”

This is consistent with our own experiences isn’t it?  A guy helped his neighbor mow his lawn when the man’s mower died, and that fall the neighbor joined him as he raked his yard.   The cashier was a little snippy, but her customer was so kind and positive, that the cashier volunteered to bag her groceries for her.

The ball comes back around the pole to bring the blessing we sow.

But there is the flip side too.

In Proverbs 26 Solomon also wrote about the evil we might do.  He mentioned lying, hatred and all other kinds of mischief.  He then capped it off in verse 27 saying, “The one who digs a pit will fall into it; the one who rolls a stone—it will come back on him.”

Pretty interesting imagery!  Wylie Coyote comes to mind.  He buys a shovel from the Acme Company to dig a pit in order to trap the road runner.  Inevitably he stumbles in himself.

In the next scene, he uses his Acme hoist to lug a boulder up a hill – still another scheme to steamroll his prey, but it breaks loose and leaves a paper-thin coyote.  Beep-beep!

Solomon wants us to know that the evil we say and do, tends to spin around the pole and return to hit us in the back of the head.

These things often happen in real time, but if not now, the ball will come back to bonk us when we stand before God and give an account for our lives.  Paul put it this way in Galatians 6:7, “Do not be deceived. God will not be made a fool. For a person will reap what he sows.”

I got enough lumps in tetherball to know that I want to avoid the same in life.  I need to treat people right.  Fortunately, Jesus gave us a really handy gauge by which to monitor our behavior.  He said, “Treat others in the same way that you would want them to treat you.” (Luke 6:31)

Weigh every word. Consider every deed.  Choose to do well, cause it’s the right thing to do, and cause it’ll come right back at you.

A PRAYER: Lord help me be mindful and careful of the impact I have on others.

This has been Jim Johnson with pickleheavenpress.com

May the grace of our Lord Jesus Christ be with you

Scripture references are from the NETBible ®