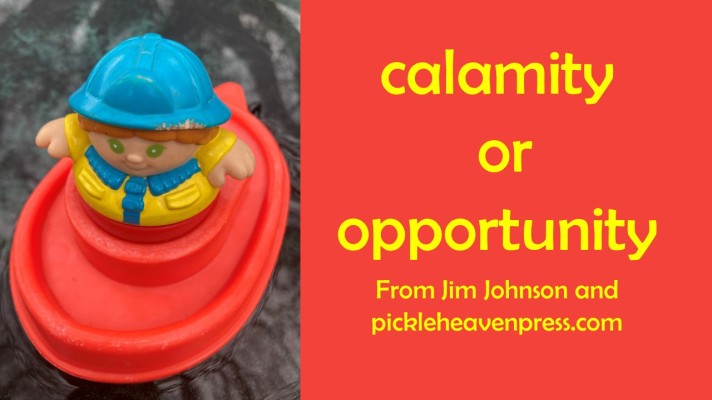 She entered the house and heard the water running but couldn’t figure out from where – until she stepped into a lake in our kitchen.  It was growing and moving into the living room.

What a calamity!  She left our five-year-old in the house and hysterically ran to the neighbor.  With a panic pitch she begged him to help.  He found our water meter and shut off the flow.

My flustered wife, returned to the kitchen and was tickled to find our little guy there.   He had grabbed a boat and some people from the toy box and was having a super time floating that boat past the stove.

Some people look for opportunity in a calamity!

The dynamic apostle Paul was one of those.  He was about 30 years old when he was commissioned to be the apostle to the Gentiles.

He then carried the Gospel to over 50 named cities in the New Testament.  Those cities were in the ancient nations that we now know as Italy, Israel, Saudi Arabi, Syria, Lebanon, Turkey, Sicily, Malta, Crete, and Greece.

He established at least 14 vibrant churches.  To do all of this, he traveled on foot over 10,000 miles.  That compares to walking from New York City to LA times four.

He operated in high gear, driven by a mission to see people come to Jesus BUT he eventually ran into a brick wall.  He was arrested and taken to Rome for trial.  Like Jesus, he was unjustly painted as being a seditious threat to the Empire.

His freedom to work was stolen.  The folks in those churches that he had planted, must have considered his jail time to be a calamity of catastrophic proportion.

But wait!   Because he was a Roman citizen, he was placed under house arrest for 2 years. He had to rent a home and provide for himself while he awaited trial.  And always he was chained to a soldier of the famed Praetorian Guard.

There was 9,000 of them and all were stationed in Rome.  This Imperial force was the elite and most highly trusted unit in the Roman army.   There was always a Praetorian guard at the side of the Emperor.

Paul looked for the opportunity in his calamity and found it.  This is what happened according to Philippians 1:12-14.

“I want you to know, brothers and sisters, that my situation has actually turned out to advance the gospel: The whole imperial guard and everyone else knows that I am in prison for the sake of Christ, and most of the brothers and sisters, having confidence in the Lord because of my imprisonment, now more than ever dare to speak the word fearlessly.”  NETBible ®

The captive had a captive audience chained to him, so he continued to preach.   Some of those soldiers were sorry they were chained to him.  Others came to faith.  This would have been significant because they were the most respected and influential military men in the empire.

The scandal must have been whispered throughout the entire guard of 9,000.   The Gospel was strategically advancing as it saturated the leadership of the Roman Empire.

Bonus: Because Paul was sidelined, other Christians stepped up and began to fearlessly share the faith.  The number of evangelists at work was exponentially multiplied.

Double Bonus.  In the 2 years Paul was under house arrest, he also penned the letters to the Ephesians, Philippians, Colossians and Philemon.  Priceless truth was recorded over those 2 years.

In every calamity there is an opportunity.  This is true because our God is in sovereign control of all, and He promised to work all things together for good for those who love him and are called according to His purpose – even the things we consider calamities.

Take another look at that issue that’s eating your lunch.  You may find a place to float your boat too.

A PRAYER: Help me to reframe the calamities in my life so that I see the opportunity in them.

This has been Jim Johnson with pickleheavenpress.com

May the Grace of our Lord Jesus Christ be with you.