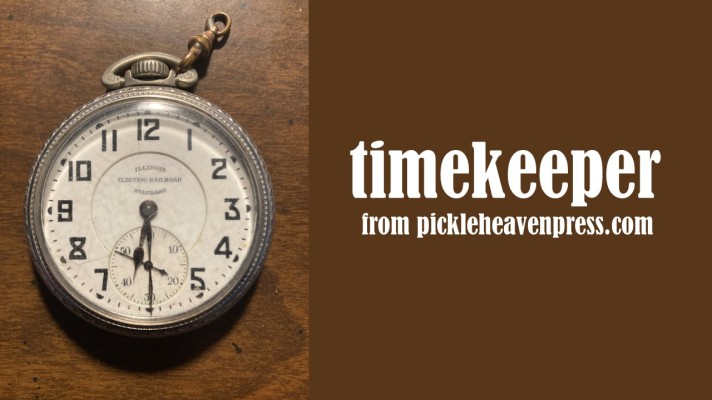 The timekeeper gave the go ahead to the Toledo Express train, to head east toward Cleveland.  But they had to hurry.  The train needed to pull off on a siding near Kipton, Ohio to allow a westbound mail train to pass.

Due to the timekeeper’s faulty watch, the train left the station 4 minutes late.  This resulted in both trains violently meeting in a head-on collision.  Nine men died in that tragedy on April 18, 1891.

The disaster became the catalyst to create watch standards.  The General Timepiece Standards Commission mandated that all standard watches had to keep time accurately with no gain or loss of more than 30 seconds a week.

Now it wasn’t too long after the Kipton calamity, that my Grandfather, Fred Lodge, was hired on as a timekeeper for the Penn Central line.  For decades he used his own finely tuned “standard pocket watch” to precisely manage the comings and goings of the trains.  There were no head-ons on his watch (which sounds like a pun but it’s not)

I was given his watch after he passed. (the one pictured above) Knowing the history of it, I have treasured it.

My Grandpa managed time so to speak, but God does a much better job of it.

Solomon penned these words in Ecclesiastes 3:1 “For everything there is an appointed time, and an appropriate time for every activity on earth.”

These are familiar words to many of us, but I wonder if we grasp the meaning?  Solomon tells us that everything that takes place, has a pre-determined time that governs when it starts, how long it lasts, and when it ends.

Who is in charge?  God of course, who not only predetermines the timing of things, but makes sure the timing is appropriate.

We might wonder, “Well what things?”  Solomon tells us in the verses that follow, but the standouts are the times of our birth and of our death.   Who could argue with that?  It is God who sovereignly predetermines these things.

My Grandpa kept trains from colliding whereas God keeps time itself from colliding.   He keeps the present from lagging into the past or bumping into the future.  He makes sure that spring always follows winter.  He set the sun in the sky as the standard bearer of time.  He is the timekeeper of the universe.

He said as much through the prophet Isaiah, “Remember what I accomplished in antiquity.  Truly I am God, I have no peer; I am God, and there is none like me, who announces the end from the beginning and reveals beforehand what has not yet occurred; who says, ‘My plan will be realized, I will accomplish what I desire.”  – Isaiah 46:9-10

And yet, we still struggle with the issues of time.

“Oh no, if I don’t get the rent together this week, I’ll be on the street.”   We worry that God will be late!   He won’t because He is the sovereign timekeeper.   He will provide what we need, precisely when we need it.  How could He do any less for the child He loves.

Oh, but sometimes God seems too early for us as in, “The boss wants me to take charge of the project, but I am not ready for it.”  God prearranged this challenge.  He knows what He is doing.  Maybe you aren’t fully ready, but you may need the challenge in order to get there.

And there are those times, we wonder if God has lost His watch.  “Lord, it’s been five weeks and I still haven’t heard from the realtor?”   He knows you need to sell your house.  It will happen when He deems it appropriate.

So I am thinking that we ought to trust God with time, to avoid a trainwreck of our own.

A PRAYER: Lord forgive us for believing that we have control over time and help us to trust You with it.

This has been Jim Johnson with pickleheaven.press.com

May the grace of our Lord Jesus be with you.

Scripture references are from the NETBible.com