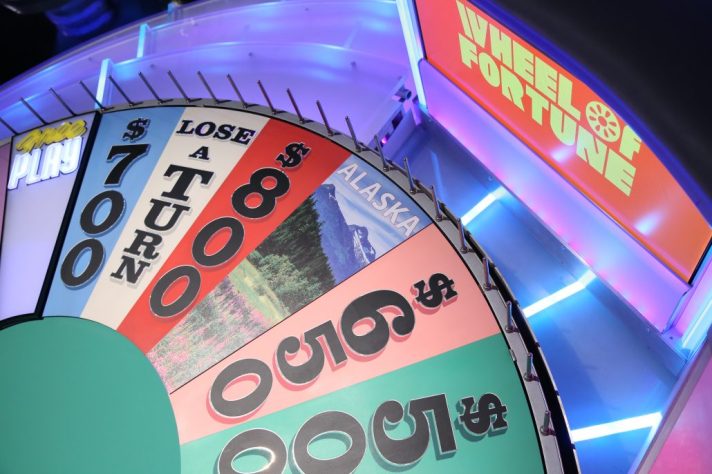 This is the story of Wyn the weepy Wheel Watcher.  My friend Wyn is an avid fan of Wheel of Fortune.  He is even registered to win prizes.

So, one day a studio contestant spun the mighty wheel and it came to rest on the “Mystery Wedge.”   He flipped it over and found that it was worth $5,000.   Then Wyn’s first name and last initial was projected on the TV screen.  He was randomly selected as the lucky Wheel Watcher.  If the studio contestant could solve the puzzle, then both he and Wyn would become $5,000 richer.

Well the boy was good with his ABC’s and he solved the puzzle.  They both won.  Wyn had 24 hours to contact the show and claim his prize.

No problem – except that on that particular day, Wyn was out watering his veggies instead of vegging out on the sofa.  So, he didn’t know that he had become a winner.

No problem!  The show also follows up with a phone call – except that Wyn will not answer his cell phone unless he recognizes the number.  Vanna White was not in his contact list – yet.

No problem!  The show also follows up with an email notice.  Now Wyn does look at his email, but not often.  He checked it the next day and finally got the news.   Fantastic!  He could do a lot with $5,000 bucks – except that he didn’t check his email until after the deadline had passed. He was 15 minutes too late and $5,000 the poorer.  Wyn lost!

Now you may be saying to yourself, “That’s a nice story – a little goofy – but it’s got nothing to do with me.” But – it does.

Scripture pictures a similar scenario. Christ is in the role of the studio contestant, while everyone else passively sits at home and watches.   And – whatever He wins, we win.

Vanna tell them what they’ve won. “But God, being rich in mercy, because of his great love with which he loved us, even though we were dead in offenses, made us alive together with Christ – by grace you are saved! – and he raised us up together with him…” (Ephesians 2:4-6) -NET Bible®.

Did you catch the word “with?”  We were made alive together with and raised up with Christ.  He won the contest when He defeated sin and death at the cross.  The proof of His victory was in His resurrection.

Because Christ was raised from the dead, we who have believed in Him are also entitled to the same prize.  This is our ticket to the resurrection and eternal life – a very desirable prize.

I serve as a Hospice Chaplain.  My job is to sit with and listen to and encourage and pray for those who are dying.  Can you guess what they most often want to discuss?  The future, of course!  They want to know if they will live even after they die.

It’s a rich privilege to tell them they can.   John 3:16 is a reminder, “For this is the way God loved the world: He gave his one and only Son, so that everyone who believes in him will not perish but have eternal life.”  -NET Bible®. The person who has trusted Christ as Savior in this life, will enjoy His company in the next.   It’s already been won.  We need only claim it.

But there is a limited time?  The deadline falls the moment we take our last breath in this life.  15 minutes after is just too, too late!

Wheel of Fortune is the most watched program on TV, with an average of about 2 million people tuning in each day.  I bet one of Wyn’s countless friends was watching the day his name was chosen.

It would have been nice if one of them would have called.  Wyn might have answered his phone for a friend.  That friend could have asked, “Hey Wyn, did you know that Pat Sajak has a check for $5,000 with your name on it? ” But alas, no one cared enough to call.

So how much do you care?  Isn’t there someone in your circle of family or friends, who needs to know that Jesus has won for them the gift of eternal life?

I can think of an easy, non-offensive and fun way to do that.  Send them the link to this blog!