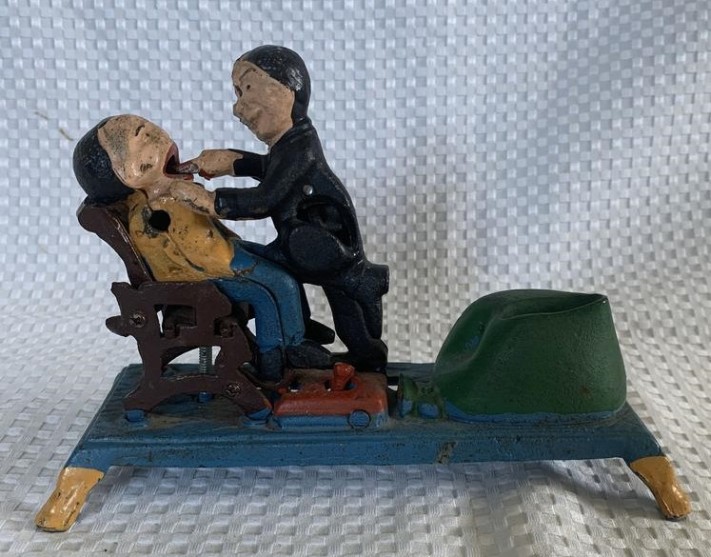 the dentist and my date

One summer afternoon, this high school student, clocked out at work, jumped in my car and picked up my girlfriend for an evening of food and frivolity.

I, however, worked in fast food.  I needed to shower and scrape the grease from my face.  So first, to the house, for a face lift.

But my mom caught me and said, “Not so fast – you have a dentist appointment?”

So, my date and I delayed our dinner plans and headed to the dentist.

”Oh oh,” I thought.  He plans to fill a cavity which means he will numb my mouth.  Not good!  The effect of the Novocain will last for hours.  It will kill our date.

Our dinner conversation will be interesting. “Well Jim how was your day?”  With my lame tongue I’ll say, “bery schlwell shlank you.”

And it will be hard for her to look into my eyes when there’s drool on my chin.  Oh, and forget about a goodnight kiss.  Yuck!!!

My self-esteem required an alternative plan.  So, I asked the dentist, “Is it possible to do this without an anesthetic?”   “Sure,” he said, with a subtle smirk.”

He cranked up his drill, plunged it into my naïve mouth, and began to bear down.  It took me a millisecond to realize – I had made a huge mistake.   The pain was 100 times beyond excruciating.

The nurse tried to hold me down, but my voice would not be stilled.  I screamed like a baby while my date sat nearby.

Several years later he finished.  I walked out of his office with silver in my mouth and egg on my face.   As for our date.  Awkward!  Not a lot of conversation and forget the good night kiss.  My mouth was a crime scene as far as she was concerned.

All because of my pride!

It seems to me like the more we protect our pride, the more humiliating it gets.

This is a truth, in fact, rooted in Scripture.  “After pride came, disgrace followed.” – Proverbs 11:2 (NETBible ®)

Why is this?  James tells that God is responsible. “God opposes the proud, but he gives grace to the humble.”  James 4:6. NET Bible ®

A scary thought.  God opposes the proud person.  The passage doesn’t specify whether the person is a Christian or not.  He doesn’t discriminate in His war against pride.

So why single out this sin?  Because nothing has cheated God and taken more away from Him.

Lucifer was His prized angel, but pride turned him into a dark vicious adversary.   Adam and Eve were the pinnacle of all creation – made in His image.  And the pride that grabbed the fruit, ripped apart the heart of God.

Pride creates ugly barriers between God and the children He loves and most of us are unaware.  Oswald Sanders wrote, “Pride is a sin of whose presence its victim is least conscious.”  (Spiritual Leadership)

And yet the more we protect our pride, the more humiliating it gets.

She lied to cover a mistake because it is embarrassing to fail.  Her lie, however, was eventually uncovered.  It is humiliating to be outed as a liar.

His fellow alumni made him feel insecure, so he salvaged his pride by allowing them to think that he was wealthy.  But they saw him leave the party in a well-used Kia.  He probably won’t attend the next reunion.

He forgot to follow through on his assignment at church.  He protected his ego by blaming it on his wife.  She is now wounded and hasn’t spoken to him for 6 days.  The church folk have noticed.  Humiliating!

We protect our pride at our own peril.

I recently sat down with a friend.  Our relationship was somewhat strained.  He had said some things that he shouldn’t have and he eventually came to recognize that he was wrong.

He could have preserved his pride and kept it to himself – but he didn’t.  He sat across from me at breakfast, told me what he had learned and asked me to forgive him.  Which I gladly did.

Did I lose respect for him?  Absolutely NOT.  I esteem him far more now than I did before.  It’s ironic I know – but that’s just the way it works with pride and humility.

So, here’s a take away from all this:  Be honest when you fall short and drop the pride.  AND don’t ever pass up a dental anesthetic.