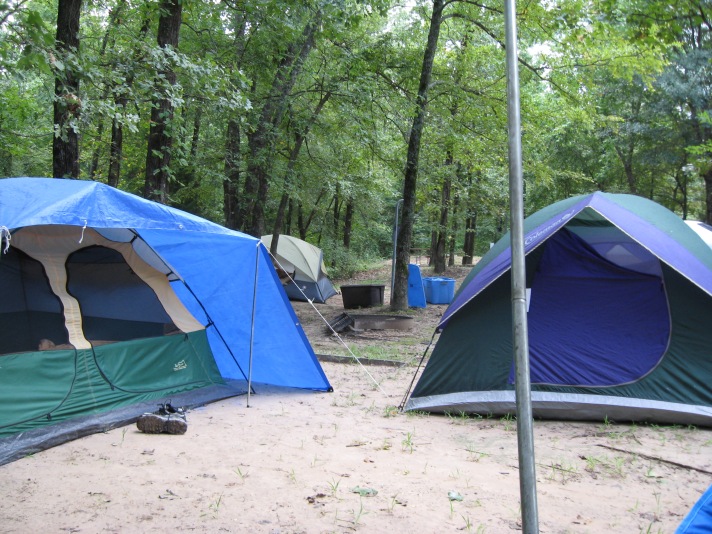 It is summer and a great time to go camping, unless you live in Texas, where the heat can approach the outer limits of hell.

Summer camping elsewhere is usually fun.  My wife and I just returned from an outing, where a fresh cool breeze wafted through our camper each night.  We had lots of relaxing time with the Lord and each other.  (that’s what happens when you leave the grandkids behind)

Of course, some trips are not so relaxing.  My extended family did a big outing once.   Pretty memorable.  It started with a rampage of ground hornets who had been aggravated by a lawnmower.  My grandson sustained several stings.

Later that evening my granddaughter spied a night intruder.  In a trembly voice she cried, “a snake!”   My son ground the baby copperhead to pieces.  But nature got him back the next day, when a squirrel in a tree relieved himself on my boy’s head.   The next morning, there was a loud ominous crack in a tree which dropped a massive limb barely behind us.

Then there were the honeybees that sought out my sweet daughter, and there was the earsplitting industrial hum that came from the power plant across the lake.  Actually, it was better for sleeping than white noise.  All that in one outing.  Fun!

I love to camp but I must admit that my favorite part is going home.  Roughing it is great for a time – a short time.  A human burrito sleeping bag is OK for a night and a charred hot dog is good once a year.  But there is nothing like packing up and going home.

I suspect that is why Paul used a camping word to capture the way we go to heaven.  In Philippians 1 we find him conflicted wanting to continue his work on earth while longing for the comforts of his heavenly home.

He wrote, “For to me, living is Christ and dying is gain. 22 Now if I am to go on living in the body, this will mean productive work for me, yet I don’t know which I prefer: 23 I feel torn between the two, because I have a desire to depart and be with Christ, which is better by far, 24 but it is more vital for your sake that I remain in the body.”  NET Bible ®

Did he really say that – “dying is gain?”

He believed that dying is a departure from this life and a move on to heaven.  The word depart (verse 23) was actually a camping term in Paul’s day.  It was used to describe an army that was breaking down their tents and moving out.

In 2 Corinthians 5:1-5 Paul reminds us that our bodies are like tents – designed for a temporary stay – flimsy, tattered, and insufficient for the long haul.   Paul was ready to pack up his ratty tent and trade it in for the eternal home that Jesus had prepared for him.  (John 14:1-3)

The word depart was exceptionally colorful. Not only was it used of camping, it was also a nautical word descriptive of a ship that was being loosed from her moorings.

In a similar way, we are moored to the pier of a place that is not our home.  It feels somewhat secure to be tied here, but the longer we remain, the longer we postpone the joys of being where we really belong. Death is the process of casting off the restraining ropes and sailing home.

Depart was also a legal term used to describe the release of someone from prison.  I think of some of the folks I care for as hospice chaplain.  Their health has declined and has imprisoned them in bodies to where they can’t even escape their bed.  For them death, becomes a benevolent liberator.

The word was also used with livestock.  It described the process of unyoking oxen.  They say a team of 2 oxen can pull about 12,000-13,000 pounds of weight.  That’s incredible.

After a hard days work, I bet those beasts were relieved to have that heavy yoke removed.  Death does the same for us.  It relieves us of the backbreaking responsibilities of this life.

All of us will face the prospect of death eventually.  When we belong to Christ, death can be regarded as more of a friend than a foe.

It enables us to trade in our temporal tent for an eternal home.  It loosens the ropes that bind us to the dock of this life.  It releases us from the circumstances that imprison us and it relieves us of our burdensome yoke to give us rest.

Paul makes a great argument for breaking camp.  I am looking forward to it.